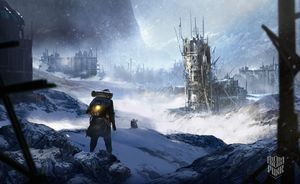 "To all scientists: If you use any supplies, remember to notify the quartermaster upon your return to the City."

- Note posted on the Door of the Sturdy Shelter

- A Signpost near the Sturdy Shelter

"God, forgive us, we’re eating our dead. There’s no hope."

- The Last Entry of a Winterhome Survivor 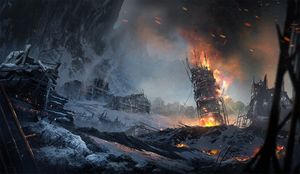 Winterhome was a settlement of survivors not unlike New London, which started out as one of Britain's long term research outposts controlled by the military (it was also the head quarters of all research and scientific expeditions within the frost land). By the Fall of London, the settlement had become a small city. It was expected by most of the residents to be very advanced and thus capable of providing assistance to its new neighbor. Unfortunately, by the time New London's scouts reach it, the city is a frozen ghost town, with the generator damaged beyond repair. Alternatively, a dying man will reach New London and reveal Winterhome's grim fate in his last breath, setting in motion the events that follow the news regardless. Starting out as a militarized science outpost, Winterhome had access to some advanced technologies and a lot of manpower and resources, which allowed them construct automatons, an outpost, and an observatory, as well as a steel bridge over a deep, wide ravine.

Winterhome's backstory is revealed in the scenario 'Fall of Winterhome'. The ultimate demise of Winterhome is revealed to have been caused by the chronic failure of its generator - the result of either rushed construction, substandard materials, or poor workmanship. Despite its origins as a military research outpost, it is apparent that significant immigration has occurred due to the large presence of children. This undoubtedly put a heavy strain on resources, particularly food and housing. It is perhaps from these pressures that the first Captain (likely as a military officer) resorted to a brutal, authoritarian rule to maintain order. The harsh rule combined with possible mismanagement induced great resentment of the leadership; the first major generator malfunction appears to have been the final straw that united the dissenters into a full blown rebellion, resulting in a city-wide civil war. The victorious rebels install the player as Captain to restore the city, by now mostly a smoldering ruin, setting the scene for the 'Fall of Winterhome' scenario. In the ensuing battle, the Original Captain and his soldiers were gunned down and piled into the city's mass grave, piled on top of one another as far away from the citizen's bodies as possible.

It appears that the news about London's destruction and the arrival of massive amounts of refugees caused major strife within the city of Winterhome; a riot broke out over food shortages and increasingly harsh rule by an army captain before their generator exploded from lack of oversight. Many of them either perished from that explosion, fell in the resulting chaos, or scattered across the region in camps. Few survivors that were spared by the destruction of Winterhome were found and saved by scouts from the nearby settlement of New London.

Word of the city's fate delivers a crushing blow to the population of New London's Hope, and forces the Captain to take stricter actions in order to stabilize his people and regain control of his own city. Winterhome's demise also prompts several people to try to retreat back to London out of fear of sharing the same fate. It is up to the captain to prevent the Londoners from gaining followers and leaving the city, and to decide how humanely to keep the city together.

It is possible to build an outpost in Winterhome after discovering its fate. Some of its survivors can also be found in nearby locations. If you build an outpost here, the outpost team will collect 150 wood every day by salvaging abandoned buildings.