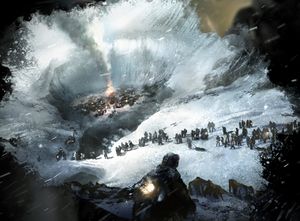 Refugees arriving at the City of Sanctuary

‘We were condemned to die with the rest of the common folk when London was destroyed. But we rose up. We commandeered the ships that were meant to carry the wealthy to safety and sailed north. Here we found a Generator and claimed it for ourselves. Now we must gather all our people in this new city before the lords arrive to rob us of our freedom again.’

The City of Sanctuary, or Sanctuary, is the nickname for the City in "The Refugees" scenario.

This City was a settlement found by the lower class of London who rebelled against the upper class, who were planning to let them die while they fled to safety.