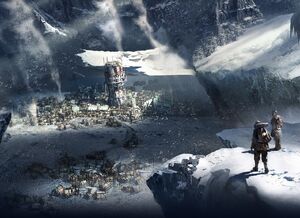 The city of New Manchester is a city that is encountered in "The Arks" scenario.

New Manchester is a settlement founded by refugees from the British City of Manchester. Due to poor leadership and a lack of skilled workers, the resulting near-collapse of city became inevitable. Fortunately, New Manchester lay close to the settlement of Legacy, in which resided scientists who were sent to the North Arctic to preserve last vestiges of plant life on Earth held within the Seedling Arks.

Depending on the player's choices, New Manchester can either be saved or left to die.

11 Bit Studios, in commemoration for Rockstar Games's success for the game Red Redemption 2, made artwork where the main character is in place of the Scouts looking at the City.