‘We fled from London and crossed the sea to reach the frozen north. On the way our convoy was hit by a blizzard and shattered. A handful of us reached the site of this Generator, only to find it frozen solid and abandoned. Why is no one here? Did any of our people survive the blizzard? Are there any others out there? Whatever we do, we should expect the worst now that the world as we know it has crumbled.’ 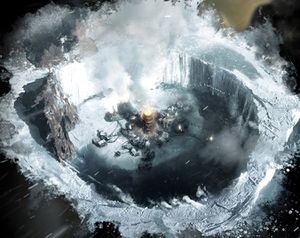 City of New London in The Pit

New London is the City in the Main Campaign Scenario "A New Home".

New London was a settlement founded by a group of survivors from London. It is considered the last vestige of human civilization against the bitter cold, as the nearby cities of Winterhome and Tesla City have fallen.

The City of New London is located inside a massive crater-like hole in the middle of a glacier, also known as The Pit. While it appears that the glacier rapidly formed as the massive amounts of merciless ice and snow descended from the grey clouds above, there is also the wreckage of a destroyed, Outpost Depot-like elevator structure that allows people entrance in and out of the Crater, suggesting that the Crater could be natural or man-made. There is enough evidence to support both claims, as the New London’s Heat Generator Tower was surrounded by a massive forest, with the majority of it laying now mostly frozen within icy walls of the glacier.

Since the Heat Generator Tower is not covered in massive amounts of snow and ice it is believed that the members of British Science Expeditions used up all of their coal resources to keep the site ice-free for the refugees before they were forced to abandon the site of the generator in hurry. Debris and wreckage can be found scattered over the area.