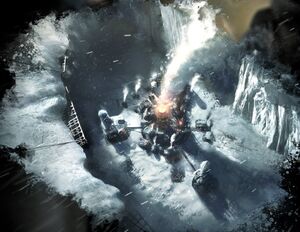 City of Legacy from a Bird-Eye View

‘We've been chosen to safeguard a priceless treasure – the seeds and seedlings of plants from all over the world. They've been deposited in Seedling Arks to stop them from freezing, but it falls to us to build a city to protect these precious buildings until the winter ends, however long that may be. The only way to do this is with automatons. We'll ensure the green earth is reborn – even if we aren't there to witness it.’

The City of Legacy, or Legacy Ark, are Fan-Nicknames for the city within "The Arks" scenario.

Legacy was a settlement founded by academics from Cambridge and Oxford, who were sent to preserve the last vestiges of plant life on Earth. While having the smallest population compared with New London and Sanctuary, the city is an industrial powerhouse. Heavily industrialized and automated, its mechanized army of towering Automatons work day and night in order to both ensure the furnace of the City’s Generator is fed plenty of coal and keep the life-support system of the Seedling Arks going.

Unlike the circular crater in New London, the city of Legacy is located in an eye-shaped crater with significantly more frozen trees - but no suitable place for an Outpost Depot. Most of its natural resources - like frozen trees, coal deposits, iron deposits and the cracks in the wall - are all concentrated on the south-western end of the crater, while the north-eastern end of it only contains a few frozen trees.

The City of New Manchester lays close to the small community of Legacy, and, depending on the player's choices, New Manchester can either be saved or left to die.